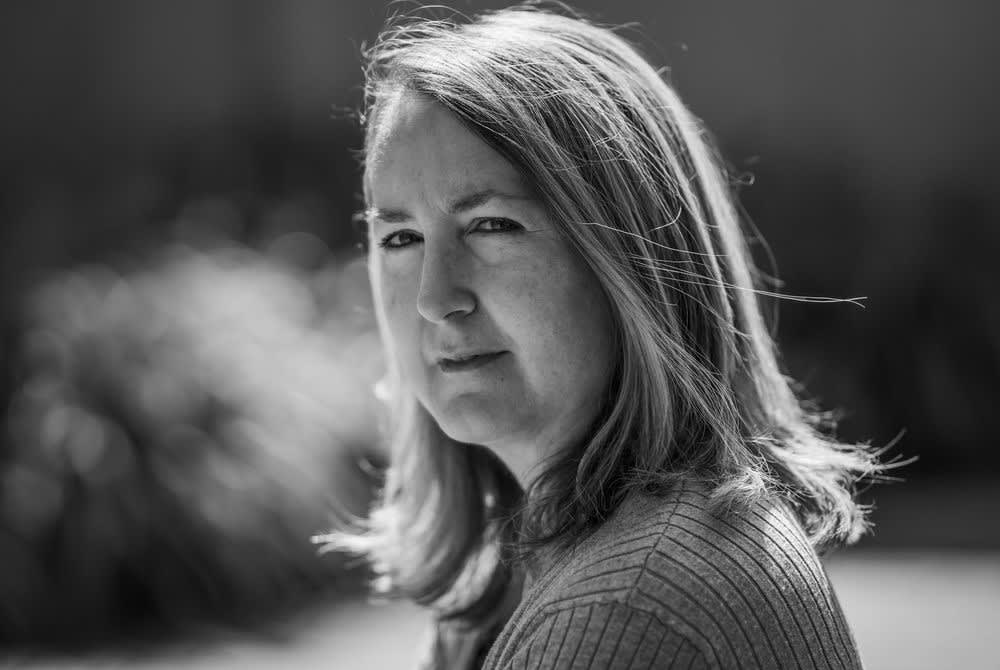 My dad died when I was 17. It was kind of unexpected. I had a crisis of faith. I just turned my back on my church, my faith, my church family. I was mad at God, you know, because my dad was everything to me.

So then I was drifting for a long time. And then many years later I met this wonderful guy, my now husband, Mike.

He was very Catholic and when we were dating, I really missed going to church. I would try to go to church on my own, but I could never find what I was looking for, it just wasn't a good fit. So then I finally said to him, ‘Well, you go to church every Sunday. Why don't I just go with you?’

I was really uncomfortable in the Catholic Church. But then one day at Mass the priest said, ‘Wouldn't it be nice if one day we all worshiped together under Christ as he intended?’

And that struck a nerve with me. I thought, ‘He wants us all to worship together. As one.’ It really blew my mind. And then every time I would go to Mass after that, I would really listen and pay attention.

Eventually, Mike asked me to marry him. And so I thought, ‘I have to do something. I have to consider a Catholic wedding, and if I'm going to do that and if we're going to Baptize the children Catholic, then I might as well become a Catholic.’

So I joined RCIA and I would go every Sunday. I would wait in my car and go when I saw the other participants leaving the church and going over to the building, and then I would just go into the building. I was always a few minutes late because they liked to eat donuts and stuff, and I didn't want to socialize. I didn't talk to anyone. They asked me why I wanted to become Catholic and I said, ‘I'm getting married.’ That's how I was. I just showed up.

A few weeks into RCIA the priest called me to his office. He said ‘We want you to take this decision to become Catholic really seriously. We don't know if your heart's really in it. We're just trying to understand, are you really in it for the right reasons?’ He went on, ‘You know, we could start again next year, take our time, and think about it.’ And I said, ‘I want to get this done. You won't have to see me as soon as you make me Catholic, I'll be gone.’

And he responded, ‘Do you know that there are people praying for you, Bethane? All the time?’ And I said, ‘I didn't ask you to pray for me. I'm not asking to make friends. Just make me Catholic. Let's get this over with.’ And I stormed out of the office. I was really mad because I didn't want attention. I didn't want friendship or fellowship. I didn't like the Catholic Church, still. I was uncomfortable with it.

I felt bad because I was kind of yelling and pointing at him, and I stormed out of the office. I felt bad. So I tried to call and I thought I should apologize. We kept playing phone tag. And so finally he left a message. He said, ‘Just meet me Tuesday morning after 9:00 a.m. Mass and I'll meet with you and we can talk.’

I was like, ‘Who goes to Mass on Tuesday, at 9 a.m. on a Tuesday morning?’ I showed up around 9:20 because I thought Mass might be over, but they were still receiving Communion. I went to the very back of the church and I just sat down.

Then I saw the priest that I was going to talk to. He left and then he came back with a white robe, and he had something in his hand that he put on the altar. And then he bowed. I remember he just went all the way down to the floor.

And then I just froze. 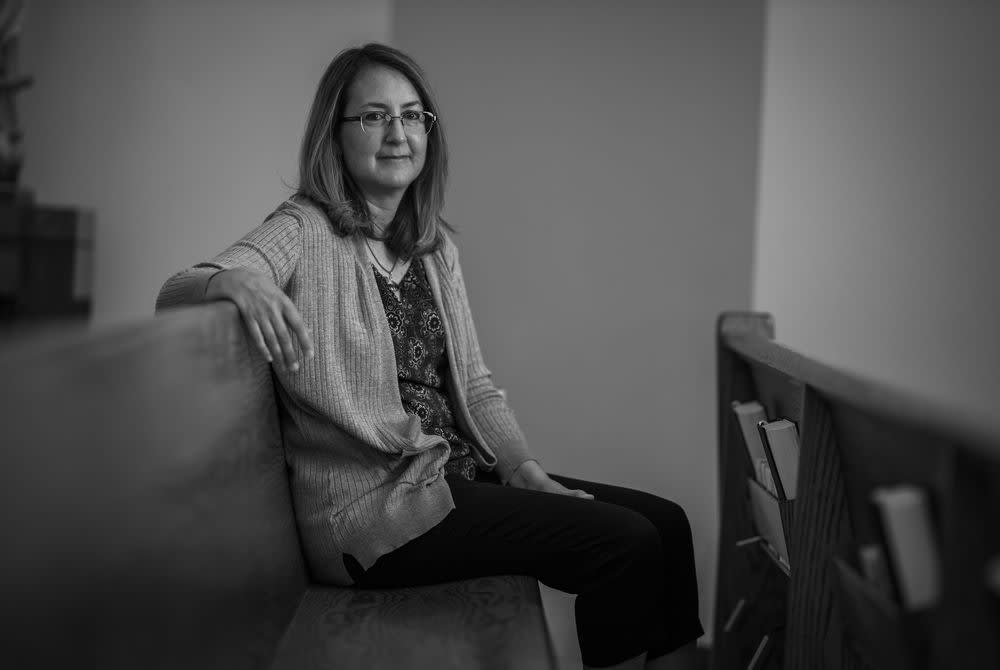 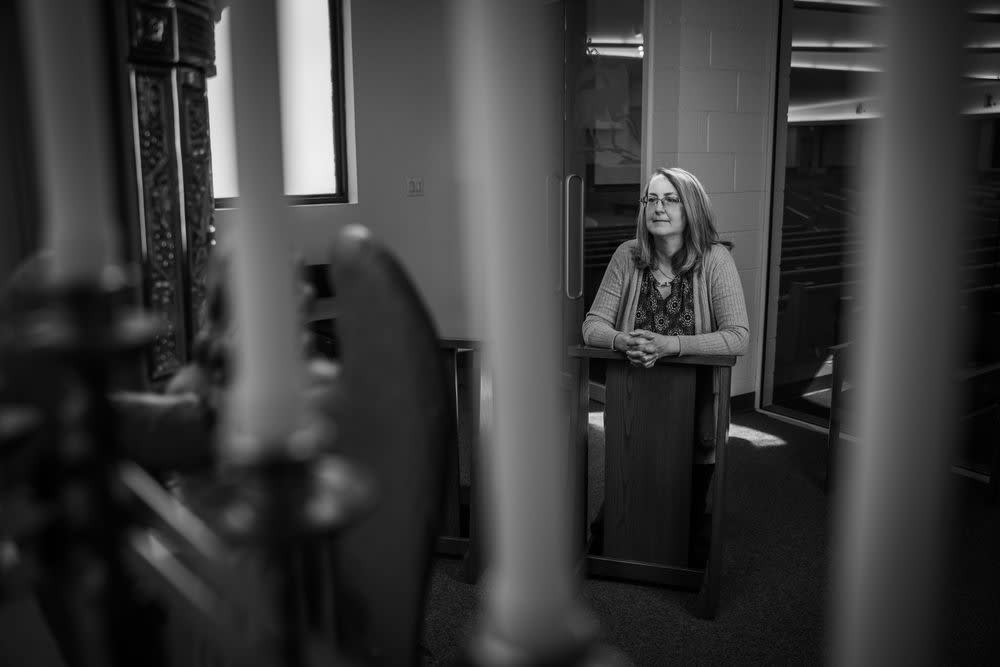 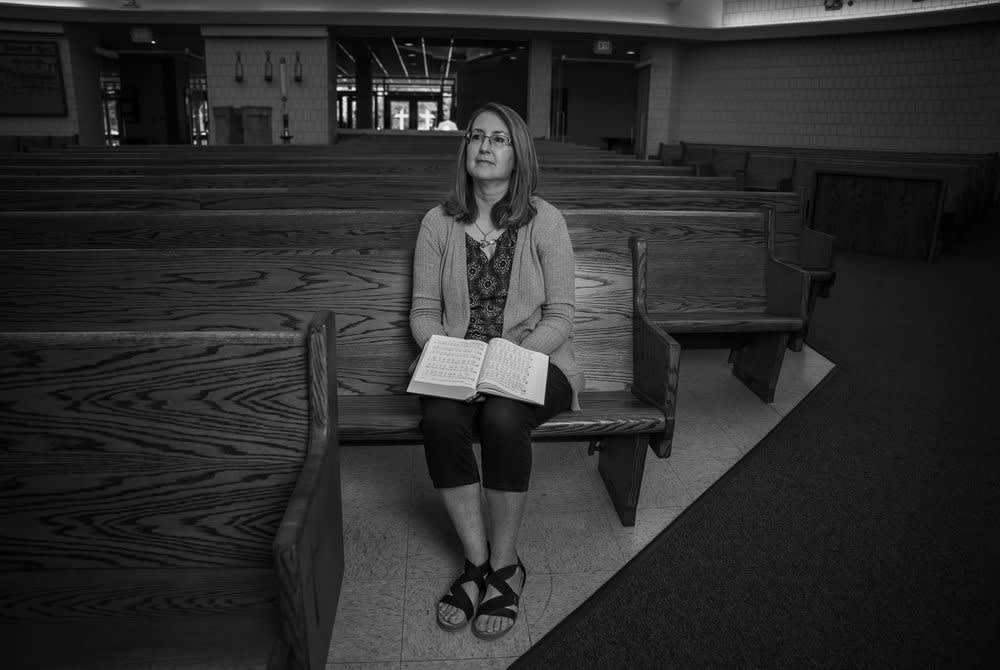 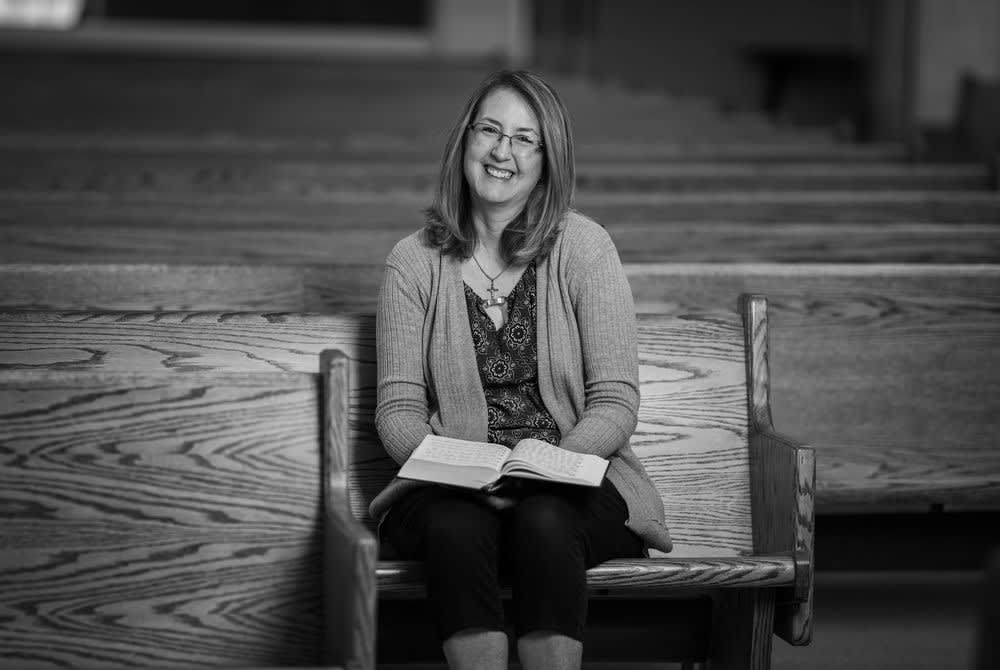 I was in the very back, all the way in the back, and I just froze. I was glued to what was on the altar. And before I knew it, I was crying. And I didn't know anything else that was going on. I was just staring at the altar and crying. I felt a tapping on my shoulder and it was the priest. He said, ‘I'll give you a few minutes.’ I was bawling my eyes out. I didn't have a tissue. And I was just like, ‘I’ve got to pull myself together.’

And so then we had to walk all the way across the church, and the whole time I was staring at the altar. I was just staring. Then we went to his office. And I was sitting there. I didn't speak for a few minutes. It felt like hours. And he was just looking at me.

I was so shocked that he said that and asked, ‘What did you say?' and he said, ‘I said, ‘Welcome home.’

When he said that, I was reminded of being a very little girl in my Lutheran church. We had church, and then we had Sunday school. During Sunday school, I would always sneak into the church because it was empty. And so when I would go into the empty church, I would sit down, and I would say, ‘God, they tell me, this is your house. If this is your house, then this is where I want to be. Would you please give me a sign?’ And then I would wait. Then I would go back to class.

I did this for years. But then after everything that happened when my dad died and I left my church, I forgot. So when he said ‘Welcome home,’ I realized that Jesus was showing me that it was him on the altar—that was home. And that was where I had always wanted to be.

At that moment, that priest didn't realize the significance of his words. But after that, we met every week. I just needed to learn. And I was so different after that. I was so involved. I would sit up front, I was excited to receive Communion. Every day I would go to church. I wanted to see what was on the altar.

As soon as they started talking about what the Eucharist was in RCIA, how it's Jesus's true Body, it made perfect sense to me. I was like, ‘Absolutely. I totally accept it.’ And then I could not wait to receive Communion.

The year after I became Catholic, my sister started RCIA. They asked her, ‘Why do you want to become Catholic?’ she said, ‘I saw a profound peace come over my sister and I want that.’ Everyone noticed this change! 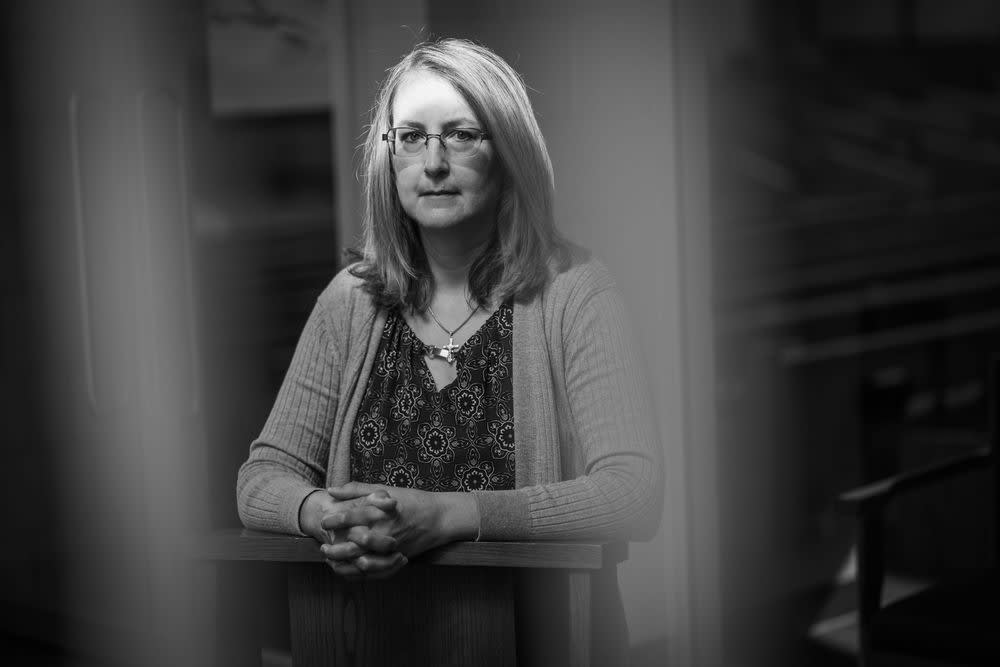 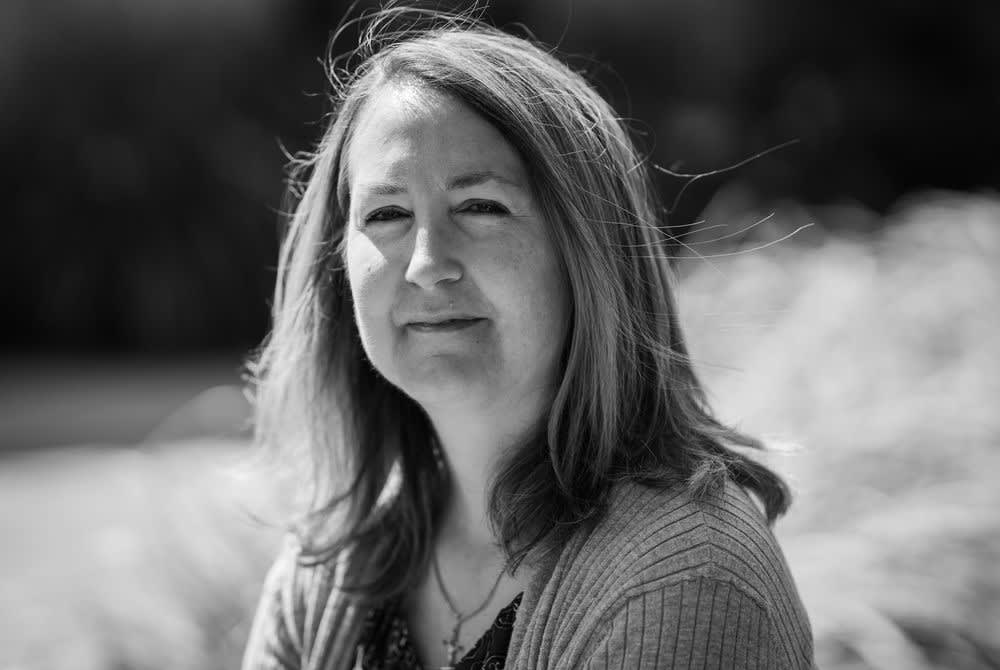 “He had not abandoned me in my grief and sorrow” 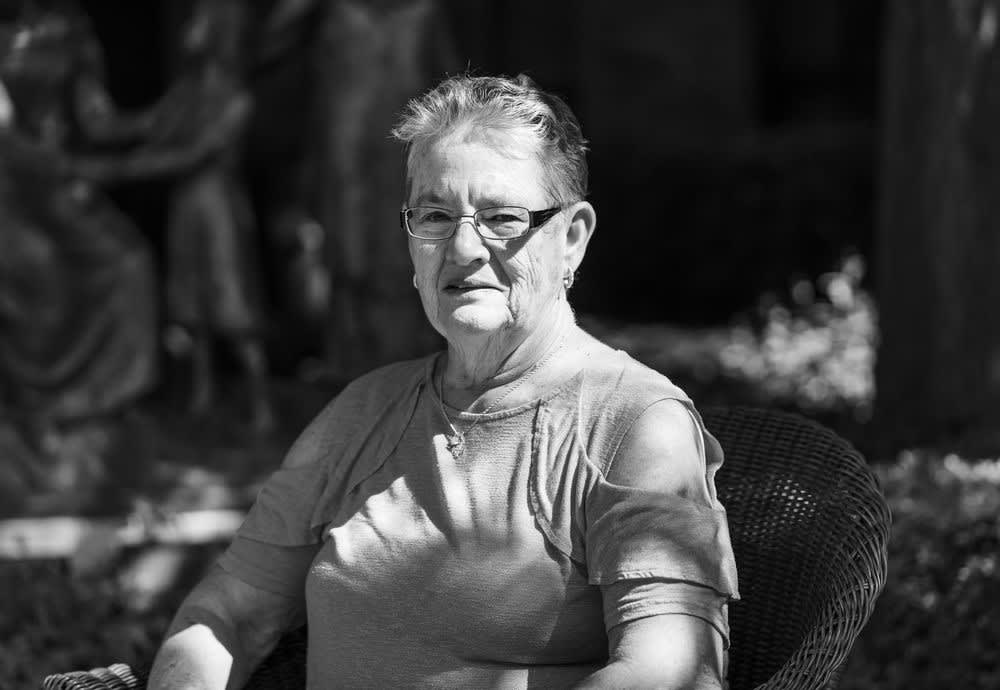